Greed of supermarkets will put Cavan Monaghan farmers 'out of business'

Pig and Poultry farmers are protesting outside Aldi in Cavan today over margins and the subsequent price that is being paid to them on their produce.

They want a price increase of 15c per chicken and 30c on pig meat.

Former IFA Poultry Chairman, Andy Boylan, said that the greed of supermarkets had reduced farmers to standing outside in the cold to beg for their fair share of the margin.

He says that the issues that are evident now for local farmers first arose in 2021.

"We find ourselves here in a ridiculous situation," he added.

"We have had to come here in the cold and beg for out fair share." 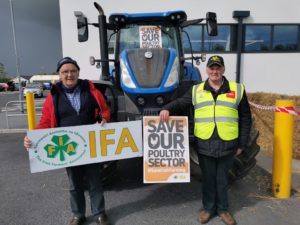 He highlighted how they would go out of business if that was not forthcoming.

Mr Brady said that supermarkets were not farmers' friends and their behaviour would put an end to highly quality locally produced food.

"I am tired of Aldi, Lidl, Supervalu, Dunnes Stores, Tesco - they are nobody's friend but their own," he fumed.

"They have massive profits there and do not want to reduce their own margin.

"All they want to do is take from everybody else's margin.

"Nobody wants them to put up the price of food.

"All we are asking is that they pay their fair share of the margin and take a little bit less for themselves."

HSE appeal to those unvaccinated in Cavan and Monaghan

Breffni House in Carrickmacross to return to 'former glory'

Sign up now to keep up to date with the latest news.